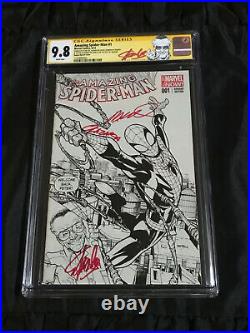 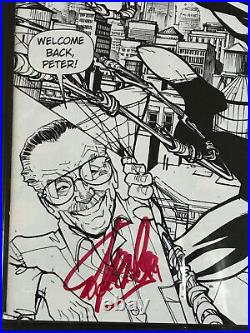 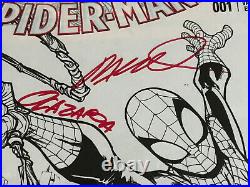 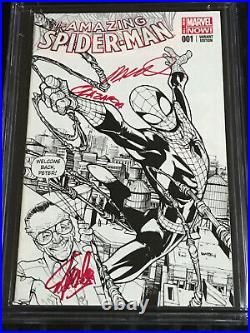 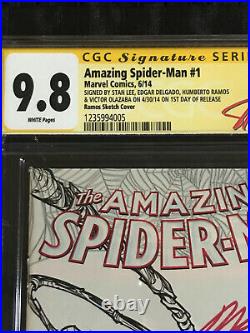 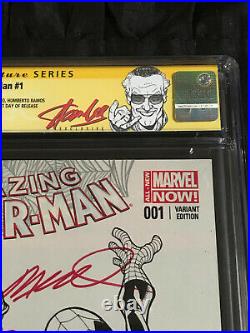 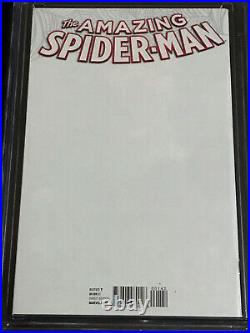 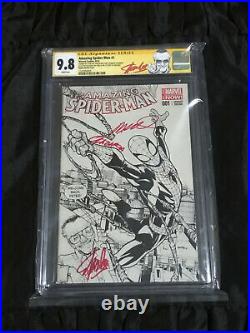 I know some of the signed covers are tough to even make out where the signature is located, or it is in some awkward place that obscures from the beauty of the cover or no obvious place for the creator to sign, but this black and white sketch cover is PERFECT for signatures from the biggest creators in the field of comics in beautiful red ink! This Stan Lee Variant Sketch Cover by Humberto Ramos LIMITED TO 2000 Copies total!!! Art by Humberto Ramos, Javier Rodriguez, Will Sliney, Giuseppe Camuncoli, Chris Eliopoulos, David Baldeon, Ramon Perez and Victor Olazaba.

Written by Dan Slott, Christos Gage, Christopher Yost, Joe Caramagna and Peter David. The world may have changed since Spidey's been gone, but so has Peter Parker. This is a man with a second chance at life, and he's not wasting a moment of it. Same Parker Luck, new Parker attitude. Putting the'friendly' back in the neighborhood, the'hero' back into'super hero,' and the'amazing' back into'Spider-Man!

Also returning: The recharged and reenergized ELECTRO! Imagine Stan Lee sitting there all those years after creating the characters and stories that made Marvel the major league player it's become and he's looking, holding THIS VERY ISSUE in his hands and deciding where he'll proudly write his name displayed on the cover! What did he think about seeing it? He got to see his creations go in places he'd never dream of! About the MAN: Stan Lee Dec. 12, 2018 was an American comic book CREATOR! - writer, editor, publisher, and producer. With artist Jack Kirby, Lee launched the superhero team the Fantastic Four in 1961 and was soon responsible for creating popular characters like Spider-Man, the X-Men, the Hulk, Thor and pretty much every major character you see in the MCU. He rose through the ranks of a family-run business called Timely Publications which would later become Marvel Comics' primary creative leader for two decades, leading its expansion from a small division of a publishing house to a multimedia corporation that dominated the comics and film industries. In collaboration with others at Marvelparticularly co-writers/artists Jack Kirby and Steve Ditkohe co-created characters including superheroes Spider-Man, the X-Men, Iron Man, Thor, the Hulk, Ant-Man, the Wasp, the Fantastic Four, Black Panther, Daredevil, Doctor Strange, Scarlet Witch, and Black Widow. About Spider-Man: In the summer of 1962, Stan Lee and Steve Ditko would conceive of and create Spider-Man, a character that would surpass all expectations and prove to be an iconic brand on his own.

Casual readers quickly became devoted to a wall-crawling wonder that was just as appealing for his sarcastic sense of humor and wit as he was for his super powers. Peter Parker would find it both a blessing and a curse to be bitten by a radioactive spider, as he would be endowed with amazing strength and agility, an uncanny sense of awareness when danger was near, the ability to stick to walls and climb almost any surface, and feeling a heavy sense of responsibility. Nearly 60 years later, Spider-Man is a household name in the United States, and the popularity of the character has spread around the world. Spidey's outstanding cinema success has already led to six films that grossed billions of dollars globally, not to mention countless successful merchandising efforts.

Check out my other rare Stan Lee autographs and Spider-man signed comics. Grab them to put in your collection while they are still available! There won't be many of these around in a few years time that won't cost a small fortune to pry from someone else's collection!

Please enjoy looking at all the photos for details of existing condition. YOU WILL RECEIVE THE EXACT ITEM PICTURED SO PLEASE LOOK CLOSELY AT ALL THE PROVIDED PICTURES. Thanks for looking and feel free to ask if you have any questions. The item "2014 Amazing Spider-Man #1 CGC 9.8 SIGNED Stan Lee Ramos Sketch Variant 4 Signs" is in sale since Monday, October 18, 2021. This item is in the category "Collectibles\Comic Books & Memorabilia\Comics\Comics & Graphic Novels".